Labor Day provides an important opportunity to reflect on the contributions by the American workforce that have contributed to our country’s success, as well as chart a path forward to ensure continued economic momentum. In that spirit, I encourage all of you to read last weekend’s op-ed by U.S. Chamber of Commerce CEO Tom Donohue, which focuses on the need to create an environment that gives businesses the confidence to invest, hire and grow.

While the op-ed focuses on U.S.-China trade, the broader point – that growing trade and investment requires our leaders to reduce uncertainty – applies just as well to the U.S.-India relationship. And on that front, we’ve seen some promising developments. During a positive meeting between Prime Minister Modi and President Trump at the G7 Summit, the two leaders agreed that USTR Robert Lighthizer and Minister of Commerce Piyush Goyal should meet to discuss a broad range of trade issues, preferably before PM Modi’s visit to the United States in September. Prime Minister Modi also highlighted plans for India to step up energy imports from the U.S., a theme that will carry into the PM’s trip to Houston for the Howdy Modi Summit and a roundtable discussion with CEOs from top U.S. energy companies.

While implementation is critical, these measures – in addition to the announcement by Minister Goyal of new openings for FDI in mining, contract manufacturing, single-source retail and digital media – represent a positive step towards the reforms India will need to attract new investment and supply chains on the move. The Government of India also received a windfall in the form of stronger-than-expected 2019 dividend from the Reserve Bank of India, which will provide $24 billion in funds that could plug a revenue shortfall in the budget.

Missed these announcements? USIBC members should check out our new bi-weekly policy updates, which cover GOI policy moves and the latest economic trends. If you haven’t yet seen the policy updates, please reach out to Carolyn Posner. You can also contact our team for more information on joining the USIBC membership for these and a host of other benefits .

Economic Update & USIBC Advocacy
On August 23, Finance Minister Sitharaman announced a series of reforms intended to stimulate the economy. The measures included, among others, changes in the surcharge on FPI investments, additional infusion of capital into public banks, exemptions for the sale of cars manufactured under older emission standards, and the establishment of credit enhancements for infrastructure and housing projects.

The FM noted the measures would be the first in a series of reforms that would be announced in the upcoming weeks to stimulate the economy. Subsequently, on September 3, Minister of Commerce Piyush Goyal announced that the GOI would raise FDI allowed in Insurance Intermediation to 100%. This reflects the announcement made by FM Sitharaman in the budget submitted by the new Modi Government immediately after the election. USIBC has advocated in support of such a move and commends the Government of India for its efforts to improve insurance penetration and distribution to Indian consumers. 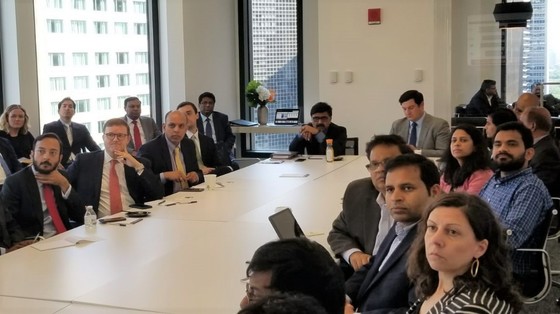 August 22 – USIBC Roundtable with Andhra Pradesh
USIBC hosted a second engagement with Andhra Pradesh (AP) and Special Chief Secretary Dr. P V Ramesh officials for midwest-based members in Chicago. Discussion centered around opportunities to develop new business connections, with the Illinois Department of Commerce offering to partner with economic development-focused leaders in AP. In addition to business leaders, the event drew researchers from the University of Chicago and Iowa State University, who raised the need for collaboration between the U.S. and India on energy sustainability and agricultural efficiency.
For more information, please contact Nick Mancini. 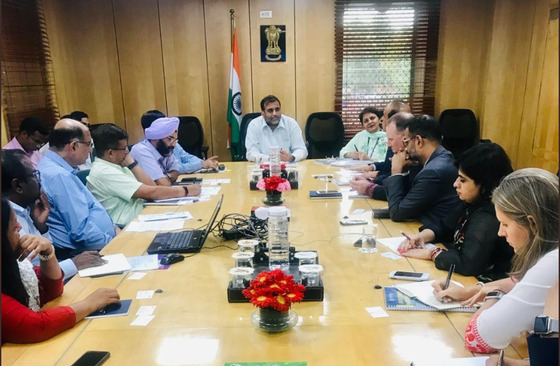 August 22-23 – Life Sciences Policy Mission to India
USIBC led a healthcare-focused policy mission to India, with a delegation including 17 companies and 31 delegates. The mission was designed to provide opportunities for USIBC members to talk candidly with regulators and learn more about new government initiatives.

The delegation focused on establishing the relationships between business and government leaders that can faciliate collaboration on public health challenges, with a particular focus on the recent ‘Ayushman Bharat’ scheme. Members also sought to raise some of challenges facing international healthcare companies in India, which include intellectual property rights (IPR) protection, price controls, the designation of essential medicines, price revision approvals and clinical trial regulations. Overall, the group focused on the importance of creating a clear and supportive policy invironment as a prerequisite for investment and growth in India’s healthcare and life sciences sector.

The delegation met with a number of GOI leaders, including the Minister of Chemicals D. V. Sadananda Gowda; Minister of Commerce Piyush Goyal; Vice Chairman of Niti Aayog Dr. Rajiv Kumar; Secretary of the Department of Pharmaceuticals; CEO of the National Health; Vice Chairman of NLEM Committee; and Joint Secretary of the DPIIT, as well as officials from the Department of Health, Department of Commerce, and National Pharmaceuticals Pricing Authority.

USIBC is currently working to prepare advocacy letters based on these meetings, which will be sent in the next two to four weeks.

August 26 – U.S. – India Financial Services Regulatory Dialogue
The U.S. Department of Treasury and the Indian Ministry of Finance held the U.S. – India Financial Services Regulatory Dialogue on August 26 in Washington, DC. USIBC’s Financial Services Committee briefed Treasury officials ahead of the dialogue on the key issues and priorities of U.S. companies operating in India.
Topics included issues in insurance, capital markets, digital payments (fintech), banking, and the Indian credit market. USIBC members will join a readout from Treasury on the results of the dialogue.