With the visit of Prime Minister Modi to the United States imminent, and the new dynamic of President Trump’s participation in the Howdy Modi summit in Houston – along with a keynote by House Majority Leader Steny Hoyer and participation by several other governors and members of Congress – there is a fever pitch of activity on the U.S.-India front.

U.S.-India trade discussions are heading towards a climax as negotiators from the U.S. and India seek to reach an agreement in advance of the leader level meetings. With expectations running high, Minister of Commerce and Industry Piyush Goyal has hinted that an agreement is in the final stages, but noted that the decision on an announcement will be up to Prime Minister Modi and President Trump.

While the final parameters of a deal are still in flux, longstanding issues including Information and Communications Technology (ICT) tariffs, medical device price controls and enhanced market access for agricultural products are certainly on the table for the U.S., as well as some form of Generalized System of Preferences (GSP) program restoration for India. As the talks advance, 44 members of the U.S. House of Representatives sent a letter on Tuesday to U.S. Trade Representative Lighthizer expressing their support for reinstating India’s GSP benefits. A more ambitious outcome could include a broader agreement on agricultural access, among other issues. Trade negotiators are working overtime, with the Minister Goyal and his team on standby for travel to the U.S. over the weekend to get the deal across the finish line.

In addition to the Howdy Modi Summit, Prime Minister Modi’s Houston agenda will include an energy-focused executive roundtable and meetings with the CEOs of several major U.S. energy companies. The energy sector is just one of a number of areas where PM Modi and the Indian government will be seeking to expand trade and investment ties with the United States, amid a significant slowdown in India’s economic growth.

Looking towards New York, the Prime Minister has a packed schedule. In addition to a slate of bilateral leader-level meetings and the UN Climate Action Summit, PM Modi will headline the Bloomberg Global Business Forum and host a CEO roundtable on the 25th. USIBC and several of our members will be in attendance, so stay tuned for updates from the business-focused event.

The visit also comes after a series of announcements by Finance Minister Sitharaman designed to boost the Indian economy, recapitalize and consolidate public banks, strengthen exports and support the struggling housing sector. With officials like RBI Governor Shaktikanta Das noting that the 5% GDP growth for Q1 “came as a surprise” and was worse than any government predictions, we are expecting more economic announcements as early as this week.

Between these announcements, the prospective unveiling of a trade deal, the Howdy Modi summit, and the UN General Assembly meetings next week, it’s set to be an action packed 10-day stretch. The action will continue after the PM’s visit as well, with planned U.S. visits by Securities and Exchange Board (SEBI) Chairman Ajay Tyagi in early October, followed by the Finance Minister around the Bank/Fund Meetings in mid October. Follow us (@USIBC) on Twitter for the latest updates and action, and stay tuned for invitations to upcoming events. 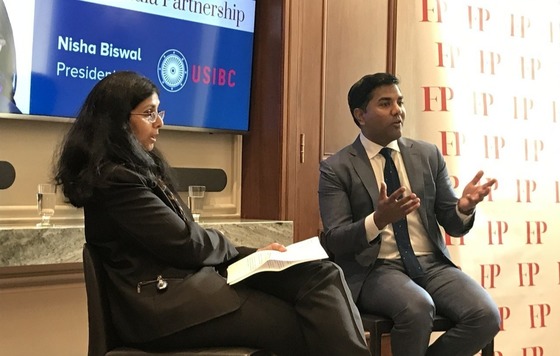 September 10 – Discussion with Foreign Policy Managing Editor Ravi Agrawal
USIBC hosted an armchair conversation with Ravi Agrawal, Foreign Policy Managing Editor and creator of the recently launched FP South Asia Brief. Agrawal explained that issues beyond India-Pakistan friction are rarely covered with nuance in western media, and noted his hope that the new weekly brief – which covers India, Pakistan, Bangladesh, Afghanistan, Nepal, Sri Lanka, Bhutan, and the Maldives – will provide a new perspective on the region. Agrawal and USIBC President Nisha Biswal also discussed declining global trust in global media in the internet age, the evolving role of media and reporting, the way ahead for efforts to stimulate the Indian economy, and how India could benefit from the U.S.-China trade dispute.

September 14 – Indiaspora Global Forum
USIBC President Nisha Biswal joined the 2019 Indiaspora Global Forum for a discussion on Geopolitics with the Global Diaspora, which included New York Consul General Sandeep Chakraborty, former Ambassador to India and The Asia Group Vice Chairman Rich Verma, and India Inc. Founder and CEO Manoj Ladwa. The panel discussion focused on opportunities for U.S.-India commercial growth in the current gloal economy and how the US-China trade tensions are impacting India. The conversation also touched on larger global headwinds, including ongoing uncertainty surrounding Brexit. The Forum is an annual flagship event which gathers leaders in the field for discussions andl networking on issues that affect the Indian diaspora. 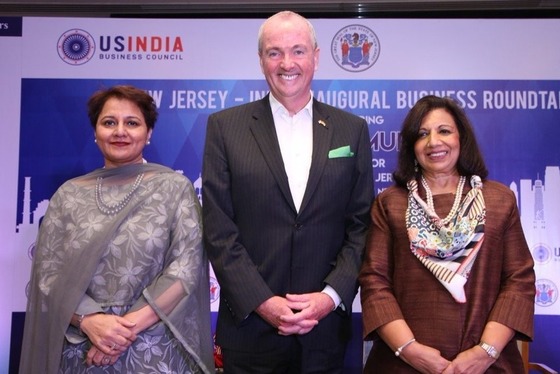 See the press release and our LinkedIn update on the event. For more information, please contact Sandip Samaddar.

September 12 – U.S. Chamber Hosts Sri Lankan Ambassador Rodney Perera
The U.S. Chamber of Commerce’s South Asia division hosted the Honorable Rodney Perera, Ambassador of Sri Lanka to the United States. Ambassador Perera, who assumed his duties in July, engaged with a small group of member companies from a variety of sectors. He identified Information Technology, Infrastructure, Renewable Energy, Food & Agriculture, and Expanded Tourism as industries Sri Lanka is eagerly seeking investment. This meeting served as an initial step to gauging member company interest in the revitalization of the U.S.-Sri Lanka Working Group at the U.S. Chamber of Commerce, as well as offering company representatives to speak directly with the Ambassador.

If you are interested in joining an exploratory committee aimed at renewing the U.S.-Sri Lanka Working Group, please contact Michael Ridings and Sid Mehra for more information.