Happy Diwali and a prosperous year ahead! We hope that you had the opportunity to pause, reflect and enjoy some well-deserved time with friends and family.

The Diwali season brought a gift from the World Bank, which moved India 14 spots higher in its annual Ease of Doing Business report. The Bank commended Prime Minister Modi’s reform efforts, which have earned India a spot on the top 10 most-improved list for the third year running and catapulted the country to 63rd in the world from a dismal 142nd in 2014. This year’s ranking reflects improvements in the processes for registering businesses, trading across borders, resolving insolvency and acquiring permits for new construction. With India’s recently unveiled corporate tax reforms not yet factored in, GOI officials have expressed optimism that India will crack the top 50 next year – a longtime goal of PM Modi.

While it may have been a holiday in India, it was an action-packed few weeks for a number of our Indian members. In Delhi last week, Prime Minister Modi launched Bridgital Nation, a book by Tata Group Chairman N Chandrasekaran and Chief Economist Roopa Purushotamam on the coming disruption of articifial intelligence. Here in the United States, I was on hand to celebrate as tech giant Wipro doubled down on their investment in the United States with the opening of a new engineering and innovation center in Richmond, VA. We also hosted State Bank of India Chairman Rajnish Kumar, who sounded an optimistic note on the overall fundamentals of the Indian economy and India’s drive to become a $5 trillion economy.

Looking ahead, Colorado Governor Jared Polis will travel to India late this week, where he’s slated to speak at the 3rd annual Global Renewable Energy Investors’ Meet & Expo (RE-INVEST). Polis will be the 5th U.S. governor to travel to India this year with support from USIBC. For more on our work to promote U.S.-India connections at the state level, check out our recent update. You can also follow us on Twitter (@USIBC) for the latest coverage of official visits and policy updates. 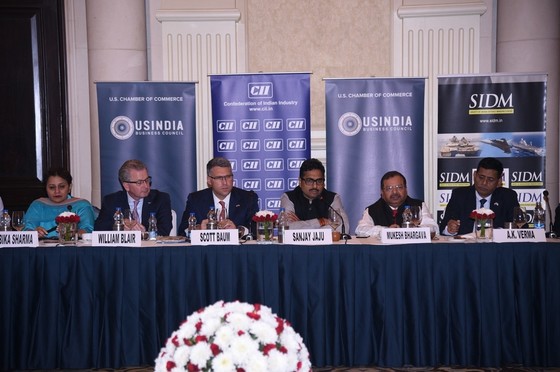 October 21 – U.S.-India Defense Industry Interaction
The U.S. India Defense Trade and Trade Initiative (DTTI) aims to strengthen defense cooperation through dialogue between senior government officials. The 2019 talks were co-chaired by the Director General of Acquisitions Apurva Chandra and U.S. Under Secretary of Defense for Acquisition and Sustainment Ellen Lord
According to the Ministry of Defense, a “significant achievement” of the DTTI meeting was the signing of a Statement of Intent on key deliverables. USIBC welcomes the expansion of the DTTI framework to encompass industry inputs and participation, and provided industry-led feedback on offsets, trade and technology cooperation, and a number of other issues. Prior to the meeting, the Indian government also provided offset credits to a number of major U.S. defense companies. 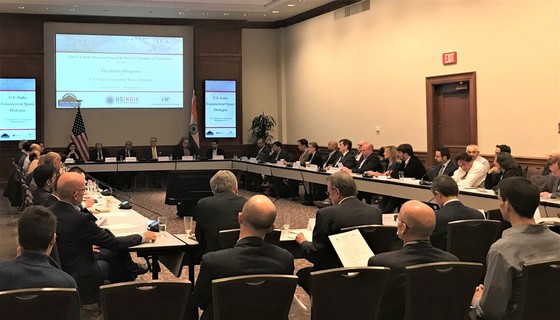 October 21 – Roundtable with Indian Commercial Space Delegation
USIBC hosted an Indian commercial space delegation for a discussion of the U.S.-India space sector, supported by the Confederation of Indian Industry (CII) and the Secure World Foundation. More than a dozen Indian space companies joined the delegation, including Bharat Forge, L&T Defense, Godrej, Aerospace Dynamatics Technology, and Walchand Industries. The group is conducting a multi-city tour focused on the U.S. commercial space industry, marketplace, and policies.The roundtable discussion drew nearly 70 participants from industry, government and civil society, and touched on India’s increasing reliance on the private sector for space infrastructure, as well as opportunities to increase trade and services between the U.S. and India. The discussion comes in advance of the government-to-government Civil Space Joint Working Group dialogue scheduled for November 20-21 in Bangalore.

USIBC hosted State Bank of India Chairman Rajnish Kumar for a small group discussion on the state of India’s financial markets and how India can transform the banking sector to support sustained investment and economic growth over the next decade. Kumar provided an overview of recent reforms in the Indian banking sector, followed by a presentation from SBI Chief Economic Advisor Soumya Ghosh on India’s drive to become a $5 trillion economy. Ghosh highlighted new growth drivers including India’s push for e-governance, digitization through Jan Dhan-Aadhaar-Mobile (JAM), expansion of the gig economy, growing end-to-end digital value chains, better financial data for lending to MSMEs, the rise of new fintech companies, and new last-mile delivery channels. He also noted that banks’ asset quality has improved in the past two years, and emphasized the Government of India’s committment to combating economic headwinds. 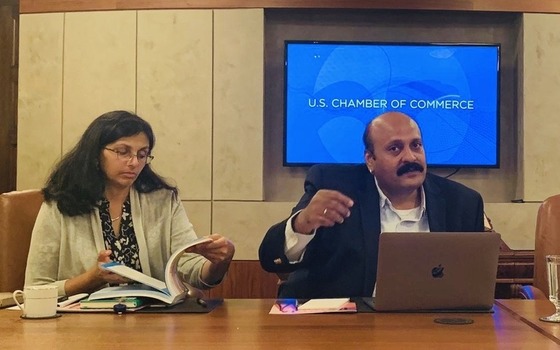 October 30 – Roundtable with Institute for Competitiveness Chairman Amit Kapoor
USIBC hosted Honorary Chairman Amit Kapoor for a conversation on the the Institute for Competitiveness’ work with NITI Aayog to create the recently-launched 2019 India Innovation Index. The Index promotes competitive good governance and adoption of best practices to support an innovation-friendly ecosystem.Kapoor explained that the report distinguishes between the “inherited prosperity” of existing resources and “created prosperity,” or how states can create the policy conditions that will allow businesses to thrive. The study is also designed to create the data needed to effectively shape government policy. He also focused on the importance of “innovation clusters” for specific industries, emphasizing that India will need to create and expand these hubs to be competitive internationally.

The Innovation Index is flexibly designed to allow updates based on real-time data. While the second edition will be released in mid-2020, the data set and metrics underlying the analysis will be publicly available on the Niti Aayog website by next week. View the full Innovation Index 2019.