As Finance Ministers gathered in Washington this week for the annual Bank/Fund Fall meetings, the global economic slowdown was the talk of the town. USIBC and CII convened a conversation with Indian Finance Minister Nirmala Sitharaman focused on the Indian economy and plans for stimulating greater growth. The roundtable, hosted at the offices of USIBC member Baker McKenzie, was a dynamic and interactive discussion that focused on advancing the economic relationship between the two countries, as well as some of the challenges facing US companies in India. Also in the news was the Nobel prize in economics, awardred to a trio of Ivy League economists for their work on poverty alleviation. There was much discussion in the Indian media of Kolkata-born economist Abhijit Banerjee, who along with colleagues Esther Duflo and Michael Kremer was awarded Nobel Prize in Economics. Born in Mumbai, Dr. Banerjee came to the United States to pursue a PhD at Harvard, a testament to the strong educational nexus between India and the United States.

In a press conference following the award, Dr. Banerjee shared concerns about the state of the Indian economy – a sentiment shared by both government of India officials and the business community. (He has also published a book with former RBI Chief Raghuram Rajan, IMF Chief Economic Geetha Gopinath and 10 other economists laying out the challenges facing India’s economy and some recommended solutions.)

Also in the headlines was the Modi-Xi summit in Tamil Nadu, the so-called “Chennai Connnect.” While the meeeting served more as a rapport-building exercise than a vehicle for granular trade talks, the two leaders agreed to Ministerial-level talks to reduce India’s $50 billion+ trade deficit with China.

India’s economic future also featured in discussions at the third CERAWeek India Energy Forum in New Delhi this week. Speaking at the Forum, Minister for Commerce and Railways Piyush Goyal explained that he was not “unduly perterbed” by India’s economic downturn, calling it “an opportunity…to reassess capacities, productivity, costs of production.” FM Sitharaman also reassured investors that India would honor its energy agreements, a concern after the state of Andhra Pradesh asked government agencies to lower tariffs on renewable energy projects. But the biggest deal in energy this week comes from Exxon Mobile, which signed a deal with Indian state-owned Oil and Natural Gas Corp (ONGC) to develop offshore oil and gas resources.

Want to hear the latest on India’s economic policy moves? Follow us (@USIBC) on Twitter for coverage of our roundtable with SBI Chairman Rajnish Kumar next week.

USIBC hosted Senator Chris Van Hollen for a business-focused discussion with members, supported by Boeing. Salil Gupte, President of Boeing India, began by presenting on the trajectory of defence and civil aviation in India, as well as avenues for partnership between the United States and India. Senior economist Anjan Roy also provided an overview of current dynamics in the Indian economy.

Senator Van Hollen discussed how U.S. companies can support India’s growth, and engaged participants on issues including strategic trade controls and co-production, food security and medical devices. Discussion also focused on state-to-state connectivity, and how expanding ties at this level can create opportunities for cooperation between Maryland and India in bio-technology, finetch, and developing a startup-friendly business ecosystem.

For more information on this event or USIBC’s City and State Connectivity work, please contact Sandip Samaddar and Sid Mehra. 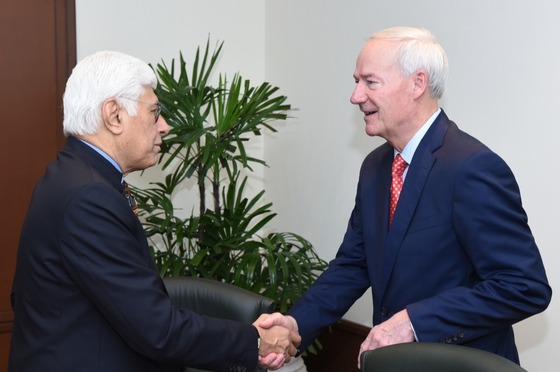 For more information on this event and USIBC’s City and State connectivity work, please contact Sandip Samaddar or Sid Mehra. 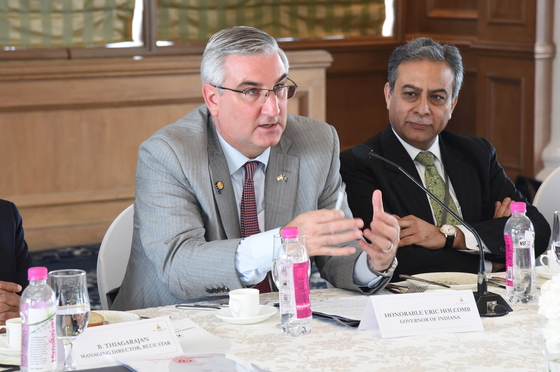 October 4 – Indiana-India Business Roundtable with Governor Eric Holcomb
Indiana Governor Eric Holcomb and Secretary of Commerce Jim Schellinger addressed over forty participants at the iconic Taj Mahal Palace Hotel early this month. Governor Holcomb lauded the benefits of investment in Indiana, which tops U.S. national rankings in return on investment, low tax rates and transparency, as well as boasting expertise and job growth in timber, life sciences and technology.Discussion focused on the future of work, the need to upskill workers, and opportunities for collaboration between India and Indiana in non-traditional segments like the sports economy, media and entertainment and educational tourism. The lunch roundtable also featured a welcome presentation by Tata Sons President of Defence, Aerospace and Infrastructure and USIBC Board Member Banmali Agrawala, whose support made this event possible, as well as a presentation by support member Infosys on the company’s job creation and skilling initiatives in Indiana.For more information on this event or USIBC’s City and State Connectivity work, please contact Sandip Samaddar or Sid Mehra.

For more information on the event or USIBC’s work in the financial services sector, please contact Hitesh Jain or Lauren Diekman.

40+ participants joined the webinar to learn more about India’s investment climate and the outlook for growth in key sectors like energy, infrastructure, environmental preservation and digital economy. Mahindra noted that companies are seeking investment opportunities in industrial cities and parks that are sustainable, eco-friendly, and offer expertise in hassle-free operations and shorter time to market through features like customizable plug-and-play infrastructure – all features of Mahindra’s growing suite of industrial parks. Location is also critical, as companies seek high growth areas with access to transportation and a strong supply chain ecosystem. Speakers also addressed India’s recent spate policy reforms and their contribution to sustaining global investor interest in the Indian economy.

October 11 – Roundtable with Senator Ted CruzUSIBC and AmCham India hosted Texas Senator Ted Cruz in New Delhi last week during the India leg of his tour through Asia, which included stops in Japan, Taiwan and Hong Kong. During the roundtable, Cruz lauded the contributions of the strong India diaspora community in Texas, and emphasized Howdy Modi as a critical catalyst for future U.S.-India ties. On business issues, Senator Cruz was primarily in listening mode, as he sought feedback and views from senior business leaders from U.S. companies in India prior to a series of meeting with high-level Government of India officials.

October 14 – Connected Cars Panels at the Indian Mobile CongressUSIBC led a delegation of companies to the 2019 Indian Mobile Congress (IMC), India’s largest annual digital technology event, held from October 14-16. In opening remarks, IT and Communications Minister Ravi Shankar Prasad noted the government’s awareness of issues surrounding spectrum pricing, and said that the Department of Telecommunications will review prices in advance of an auction to be held later this year. Prasad also emphasized that while India respects encryption, law enforcement agencies should be able to identify the source of messages used to spread misinformation. Day one highlights also included remarks from Aditya Birla Group Chairman Kumar Mangalam Birla, who emphasized the remarkable social transformations generated by ubiquitous access to digital connectivity.

As part of the first day’s events, USIBC also organized and facilitated three panels on the future of cars and how transportation networks are transforming in the 21st century. VMWare provided a keynote to start our first panel on cars as connected platforms, followed by a discussion of the policy implications of connected vehicles. We finished the day with a session on autonomous vehicles, which touched on both enabling technology – artificial intelligence and the Internet of Things – as well as the implications for road safety, public transportation networks and regulatory reform.

Congratulations to our many members with fantastic booths at #IMC2019, including Cisco, Ericsson, Facebook, Intel, Nokia, Qualcomm, RedHat, and Vodafone, as well as to KPMG for their release of a Knowledge Report at the event.

To safeguard confidential business information, GIPC and the Indian government also published their first-ever joint project, ‘A Guide to protecting Trade Secrets,’ for Indian businesses. Trade secrets are the type of intellectual property most relied upon by businesses all over the world to retain a competitive advantage. This toolkit aims to provide a definitive guide for Indian businesses, especially MSMEs and start-ups, on best practices for protection of trade secrets.

Dr. Roy urged the G10 and emerging markets to support workforce participation by traditionally underutilized populations, delaying retirement age and ensuring equal pay and better family support systems for women in the workforce. He also emphasized the importance of sound immigration policies to support economic growth. Through these measures, Dr. Roy noted that societies can fight rising inequality, address the rising number of people who have permanently left the workforce, and support innovation ecosystems.

Lynx Investment Advisory Chairman Peter Talous and CEO & Chief Investment Officer Vipin Sahijwani both highlighted the disruptive effects of historically low interest rates on global markets, prompting a discussion of the longer-term impact on the health and wealth of societies. Dr. Roy contended that current fiscal, market, and asset allocation models are designed for a different age and that investors and analysts must create new models and strategies for navigating demographic, consumer, and even large-scale geo-economic shifts.

For more information on the event, please contact Ryan Miller. 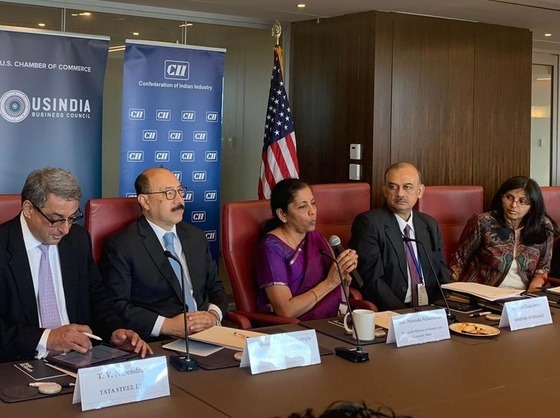 October 17 – Roundtable with Minister of Finance Nirmala Sitharaman
On October 17, USIBC and the Confederation of Indian Industry (CII) hosted Minister of Finance at the Baker McKenzie offices in Washington, DC for a discussion of India’s growth potential. The closed-door discussion with corporate leaders comes just after a series of sweeping economic reform measures announced by Minister Sitharaman over the past two months, many of which focus on improving ease of doing business and attracting stronger inflows of foreign direct investment (FDI).To allow for a candid discussion with Minister Sitharman, all remarks during the session were kept off-the-record. For more information about Minister Sitharaman’s public remarks in Washington, please contact Nileema Pargaonker or another member of the USIBC team.