This week marked the 150th anniversary of Mahatma Gandhi’s birth, with commemorations and tributes around the world. Here in Washington, House Speaker Nancy Pelosi joined Indian External Affairs Minister Dr. S Jaishankar and Ambassador Harsh Shringla for a moving tribute at the Library of Congress, where the Speaker received a bronze bust of Gandhi. Speaker Pelosi spoke of her personal connection to the teachings of Mahatma Gandhi and the inspiration that the civil rights movement in the U.S. drew from India’s freedom struggle.

The Gandhi-jayanti marked the culmination of two weeks of headline grabbing engagements for the Indian government, starting with a record-breaking gathering of 50,000+ diaspora in Houston at the Howdy Modi summit and a bilateral meeting between Prime Minister Modi and President Trump on the margins of the U.N. General Assembly. PM Modi had a packed schedule with 40+ bilateral meetings with heads-of state, a gathering of nearly 50 CEOs and senior executives as well as the Bloomberg Global Business Summit , the U.N. Climate Action Summit , the Gates Foundation Award , and myriad other engagements by External Affairs Minister Dr. S Jaishankar and Minister of Commerce and Industry Piyush Goyal .

In Washington, Minister Jaishankar matched the pace set by his boss and managed to coin a new term – “the Full Jainshankar” – as he addressed participants at 7 think tanks, 2 media roundtables, and several other business engagements. USIBC members had an intimate and exclusive breakfast roundtable at the U.S. Chamber where the minister took time to address questions from every participant.

Despite the positive momentum generated by the visit, Prime Minister Modi and Minister of Commerce and Industry Piyush Goyal left the United States last week without announcing a much-anticipated trade deal. While there was no doubt disappointment at the lack of an announcement, both sides have expressed optimism that ” significant progress ” achieved during negotiations will enable an imminent announcement of a limited trade pact. USIBC members should stay tuned for updates as we get more information.

With a number of official visits on the calendar, the pace isn’t likely to let up in the coming weeks. Here’s a brief list of just some of the conversations happening in the U.S.-India corridor: 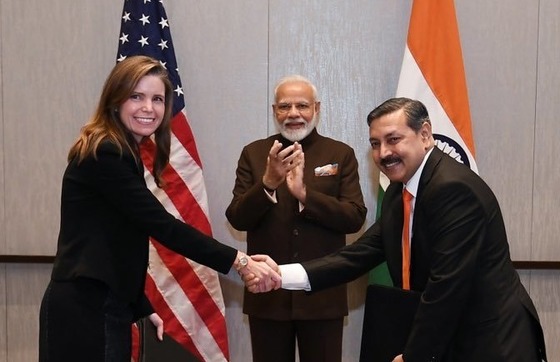 I also want to take a moment to highlight some major news from our members, whose work continues to drive the U.S.-India partnerhip forward. During PM Modi’s Houston trip, Tellurian signed an MOU with Petronet LNG – India’s largest LNG exporter – for $2.5 billion of investment into the Driftwood LNG terminal and up to 5 million tons of LNG per year. Amid a banner year for U.S. LNG export projects, this is the largest deal yet by an Indian company in the United States.

UPS also made history earlier this week when UPS Flight Forward became the first company to receive the Federal Aviation Administration’s certification to operate a drone airline . This will allow the company to deliver packages – including healthcare supplies – via a fleet of drones. Lockheed Martin announced the production of its F16 wings in India under a JV with Tata Advanced Systems Ltd. Finally, Mahindra celebrated its 75th anniversary of engagement in the United States, and announced a $275 million JV with Ford this week.

In India, Maryland Senator Chris Van Hollen and Governors Asa Hutchinson of Arkansas and Eric Holcomb of Indiana are making official visits, timed to coincide with the NBA’s first games in India on October 4th and 5th. AIF also launched a partership with the NBA to provide underprivilaged children in five Mumbai schools with technology to support classroom learning and sports-based life skills.

Follow us ( @USIBC ) on Twitter for the latest updates and action, and happy pre-Diwali shopping to all of those in India.

September 26 – Roundtable with Minister of Commerce and Industry Piyush Goyal

USIBC and the Confederation of Indian Industry (CII) hosted Minister of Commerce & Industry and Railways Piyush Goyal for a member roundtable in New York City on the margins of U.S.-India trade negotiations. The session also included Indian Ambassador Harsh Shringla, Commerce Secretary Anup Wadhawan and Department of Pharmaceuticals Secretary PD Vaghela. The Minister briefed members on his meeting with USTR Lighthizer earlier that day and provided an update on the trade negotiations. Minister Goyal noted that both sides were working to conclude an initial limited trade package, with eyes on working towards a more comprehensive package later.
Minister Goyal emphasized the GOI’s work under Prime Minister Modi to improve ease of doing business, with a goal of cracking the top 25 in the global ranking within five years. He urged companies to approach him with any issues they face in India, noting that this is the first time the entire cabinet is accessible. Minister Goyal underlined India’s strengths as an investment destination – democracy, demographics, strong work force, a large domestic market – and highlighted PM Modi’s focus on upgrading hospitals, creating wellness centers and enhancing preventive healthcare. 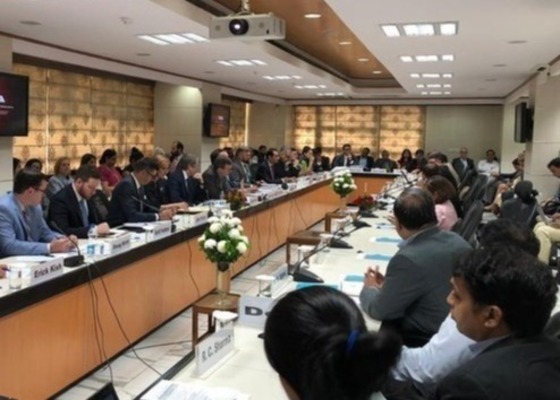 October 1 – ICT Working Group & Cyber Dialogue
Ministry of Electronics and Information Technology (MeitY) Secretary Ajay Sawney, Embassy of India Minister Counselor Robert Garverick and a number of government officials and industry representatives addressed a packed room at the ICT Working Group on October 1. During the government-to-government exchange, both U.S. and Indian officials emphasized the importance of the digital economy. Garverick proposed making the ICTWG an annual engagement, and the two sides discussed including the Federal Communications Commission (FCC) and Telecom Regulatory Authority of India (TRAI).
Data privacy and data ownership emerged as primary issues of concern during the broader discussion. MeitY officials noted they are pushing hard to take up the bill in November, and emphasized their view that most industry concerns have been addressed. They also noted that after the bill’s passage, standing up the proposed Data Protection Authority (DPA) and setting guidelines will take two years, and the DPA will work with other sector regulators to define critical and sensitive data in each sector.
During the Cyber Dialogue on September 30, participants highlighted positive cooperation on Computer Emergency Response Team (CERT), and discussed the CLOUD Act and law enforcement data access, a range of 5G issues, and capacity building through skilling, academic cooperation, and access to technology. 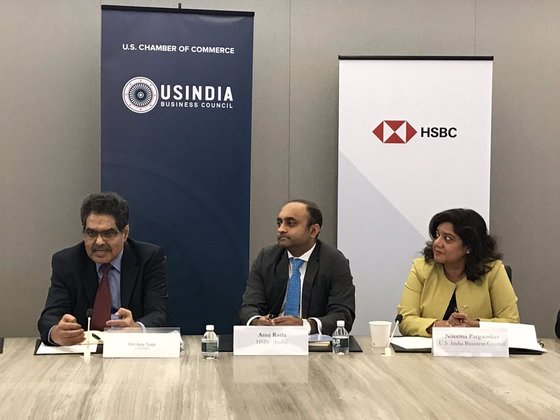 October 1&2 – Roundtable with SEBI Chairman Ajay Tyagi
USIBC and HSBC hosted Securities and Exchange Board of India (SEBI) Chairman Ajay Tyagi and the SEBI delegation for member-focused events in New York City and Boston on October 1 and 2. The Chairman began each session with a presentation on dynamics in the Indian economy and the Government of India’s recent reforms efforts. He also highlighted some upcoming regulatory shifts designed to strengthen India’s capital markets and attract new investment. Following the presentation, industry participants were able to engage Chairman Tyagi directly — highlighting some of the regulatory challenges posed by SEBI regulations, while recognizing India’s significant steps torwards reform over the past several years.For more information on the event or USIBC’s work in the financial services sector, please contact Nileema Pargaonker or Sana Bagwan. 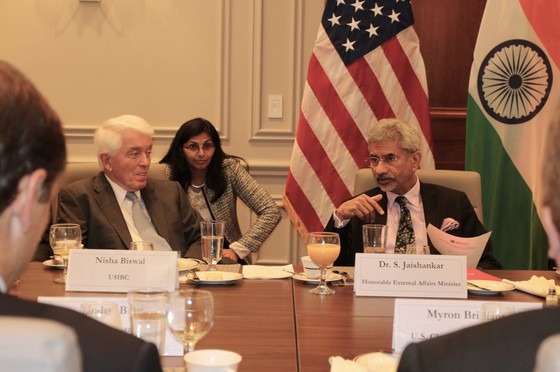 October 2 – Breakfast Roundtable with Minister of External Affairs Jaishankar
Minister of External Affairs S. Jaishankar, one of the architects of India’s foreign policy, joined corporate leaders from the USIBC membership for a closed-door breakfast discussion at the U.S. Chamber. The Minister highlighted positive progress under the Modi administration to cut through red tape and make India an easier place to live and do business, and noted the government’s committment to engaging industry and seeing through the many economic reforms it has introduced in recent months. Dr. Jaishankar expressed “cautious optimism” that the United States and India will conclude a limited trade deal in the coming weeks, which will help to remove a longstanding pressure point and source of friction between the countries. With sectors like energy and defense on the rise, and huge opportuntunites across the spectrum for stronger bilateral economic ties, Dr. Jaishankar emphasized that the relationship is on a positive trajectory.For more information, please contact Ryan Miller. 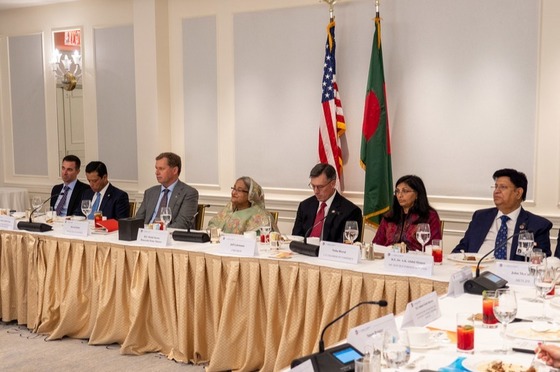 The U.S. Chamber of Commerce’s Bangladesh Working Group hosted Prime Minister of Bangladesh Sheikh Hasina and senior members of her cabinet for an executive roundtable in New York on the sidelines of the U.N General Assembly meetings. The invitation-only event drew over 40 U.S. industry leaders from across the energy, financial services, e-commerce, IT, aerospace and defense and manufacturing sectors. Following the Prime Minister’s presentation, discussion focused on the economic transformation of Bangladesh and the role private sector can play to support the country’s economic and social development. Thanks to Chevron, Excelerate Energy, GE and MetLife, whose support helped make this event possible.

If you are interested in the U.S. Chamber’s work on South Asia, or would like to more information about joining the U.S.-Bangladesh Working Group, please contact Sid Mehra.