Following the bright lights of the Diwali season, Governor of Colorado Jared Polis brought renewed energy to the U.S.-India corridor last week as he toured through Mumbai and Bangalore during the first international trip of his term. USIBC hosted the governor in both cities for discussions focused on business growth in the renewable energy, infrastructure and e-mobility sectors. With Colorado hoping to make the switch to 100% renewable energy by 2040, we see huge opportunities for knowledge sharing with the growing Indian clean energy sector. Speaking of Diwali, while the festivities may have ended in India we’re still celebrating here in Washington with a Diwali on Capitol Hill celebration this Thursday. It’ll be a busy evening, as we’re also supporting the DC premiere of The Warrior Queen of Jhansi, a film based on the true story of “Joan of Arc of the East” Rani Lakshmibai. (Watch the trailer)

On the economic front, Finance Minister Nirmala Sitharaman announced the creation of a $3.5 billion fund to complete stalled housing projects and boost the housing sector, the latest in a sweeping series of reforms designed to jump-start the Indian economy. Following a downgrade in the Moody’s Investor Service outlook for India, the Finance Ministry highlighted the impact of these reforms in shoring up the economy against global headwinds, noting that India’s economic fundamentals remain strong.

Trade and investment are also top of mind with Minister of Commerce Piyush Goyal in Washington and New York this week for meetings with U.S. Trade Representative Robert Lighthizer and industry groups. While the U.S. and India continue to work on a limited agreement, there are indications of interest in a more comprehensive conversation on trade. India has also expressed renewed interest in a bilateral deal with the U.S. following PM Modi’s move last week to withdraw from the Regional Comprehensive Economic Partnership (RCEP). Both governments have kept the content of discussions tightly under wraps, but USIBC will bring you insights as we engage Minister Goyal at an industry roundtable in New York this week.

In India, all eyes are on Maharashtra, where the makeup of the government remains in flux with none of the three major parties able to attract enough delegates to form a coalition government. As an interim measure, the state is now under President’s rule, which allows the BJP-led central government to exercise direct control. As regional parties look to reconsolidate, the BJP will also have its eye on upcoming by-elections in Karnataka, where it will need to win seats to maintain its majority.

As a quick note, with Thanksgiving around the corner in the United States, this will be our only newsletter for November. We hope our readers in the United States have a wonderful holiday with friends and family, and we’ll catch you in December to wrap up the year. You can always see our latest updates on Twitter and LinkedIn. 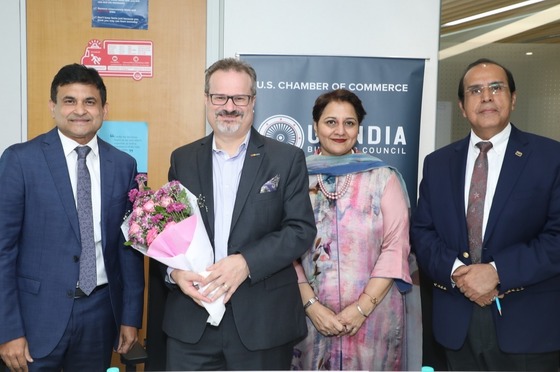 November 4 – Lunch Meeting with Mumbai Consul General David Ranz
USIBC brought together representatives from across industry for a discussion with Mumbai Consul General David Ranz, which focused on avenues to strengthen bilateral trade and investment. CG Ranz provided an overview of the U.S.-India trade talks from the perspective of the U.S. government and private sector, as well as a readout of the Treasury Secretary Mnuchin’s meetings with the Reserve Bank of India (RBI) Governor. With a number of financial companies represented at the meeting, Ranz urged U.S. companies with concerns around data regulation to engage both the CG’s office and the RBI.
Financial sector participants noted that Indian banks and non-banking financial companies (NBFCs) are experiencing a ‘hangover’ after a prolonged boom period, with financial institutions facing a twin balance sheet problem coupled with a decline in consumer demand. Many NBFCs, particularly ILFS and DHFL, had significant exposure to the hard-hit engineering, procurement, and construction (EPC) sector. Financial experts explained that the market is now going through a process of deleveraging and stabilization, with emerging opportunities tied to expanding retail credit and a deepening digital payment system.Participants also discussed the need for policy predictability and long-term stability in the pharmaceutical sector; work to improve bankruptcy laws and the credibility of contracts; judicial reform; India’s return to financial sector health; and the role of digital India in feuling growth. Representatives from EY, AZB Partners and Prinam law also provided an overview of the Goverment of India’s recent reforms to improve the business climate, including corporate tax cuts and amendments to the bankruptcy and insolvency code. 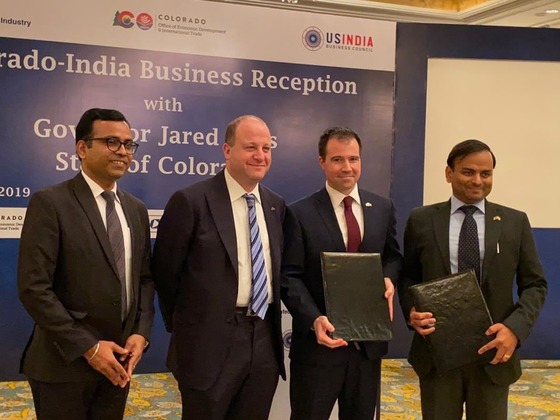 November 4 & 6 – Governor of Colorado Jared Polis in Mumbai and Bangalore
USIBC and the Confederation of Indian Industry (CII) hosted Colorado Governor Jared Polis in Mumbai (Nov 4) and Bangalore (Nov 6) for discussions with the business community on e-mobility, renewable energy and cleantech. The events drew executives from across renewable energy, energy storage, electric vehicles, project financing and legal services, as well as academic leaders, for a focused conversation on the Colorado-India economic relationship.Governor Polis noted that both economies are climate-dependent, creating opportunities for innovation in green energy and zero emission vehicles. With Colorado aiming for 100% renewable energy by 2040, Polis highlighted the role that Colorado businesses can play in sharing best practices for developing and deploying clean energy. The event also featured the signing of an MOU between Colorado electric company Xcel Energy and Indian utility BSES Delhi, which is focused on increasing its renewable energy share from 8% to 30% in the years ahead through the adoption of technologies including electric vehicles, Battery Energy Storage Systems (BESS), smart grids and solar technology. 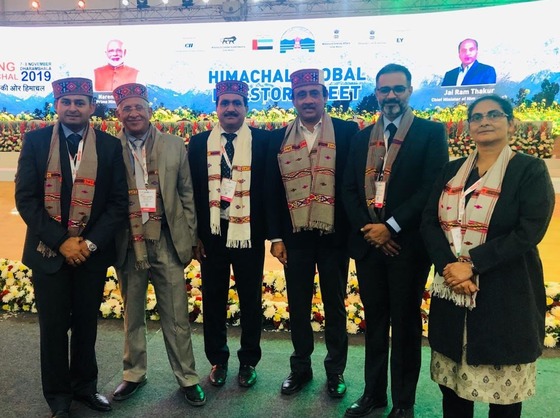 November 7-8 – USIBC Delegation to Himachal Pradesh Global Investors’ Meet
USIBC led a delegation of members to the inaugural Rising Himachal Global Investors’ Meet, which the government of Himachal Pradesh hopes to make an annual flagship business event. At the event, Himachal showcased work to improve its policy and regulatory environment, as well as investment opportunities across eight focus sectors. FDI is critical as Himachal works to boost manufacturing and employment in the state.

The USIBC delegation brought together representatives from Abbott Healthcare, Pfizer, Johnson & Johnson, Amazon, 3M, GE Healthcare, IBM, Proctor & Gamble and Flipkart, among others, for a series of meetings with officials from the Himachal Pradesh Department of Health and Family Welfare; Department of Industries; and Department of Information and Technology. With bad weather forcing the cancellation of a meeting between the delegation and Himachal Pradesh Chief Minister, he has committed to scheduling a meeting with members in Delhi during a future trip. The event also featured several MOU signings between Amazon India and the Government of Himachal Pradesh focused on enabling sales by handloom producers and providing training and on-boarding workshops for MSME exporters, community organisations and agriculture cooperatives.

Participants raised concerns around liquidity in India’s financial system, taxation and refunds, data privacy and localization, digital payments, remote access, packaging and labelling, consumer and labor laws, GST and duty structure, and harmonization and standardization of rules. Secretary Mohapatra requested that USIBC organize sector-specific discussions, which will allow DPIIT will take forward individual cases and concerns and bring in stakeholders from other government ministries and departments. 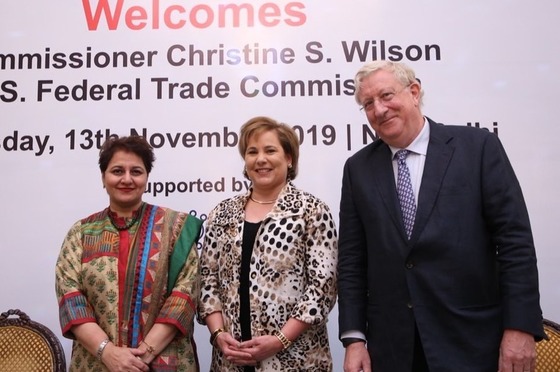 November 13 – Roundtable with FTC Commissioner Christine Wilson
USIBC and Shardul Amarchand Mangaldas (SAM) hosted Federal Trade Commission (FTC) Commissioner Christine Wilson for a reception on Wednesday, part of a multi-day series of events with the FTC delegation in New Delhi. The delegation will also participate in a data privacy-focused event hosted by the Centre for Information Policy Leadership (CIPL) on Thursday, as well as smaller USIBC-hosted roundtable on Friday.The reception for Commissioner Wilson featured a fireside talk with SAM Partner John Handoll touching on consumer affairs and fraud, privacy, and competition (antitrust, market dominance, cartels). USIBC Managing Director for India Ambika Sharma highlighted USIBC/U.S. Chamber advocacy around India’s Competition Bill and draft Privacy Bill and noted the need for a roadmap for training and capacity building to support the Competition Commission of India (CCI). Commissioner Wilson provided an overview of FTC challenges, the consumer welfare standard in competition law, and the FTC’s work to design model privacy and data protection laws. The event drew over 60 members, including representatives from legal services firms and the general counsels of companies spanning the retail, telecom, e-commerce and digital economy sectors.

Made possible with support from GE and Cheniere, the discussion focused on Bangladesh’s efforts to improve its World Bank Ease of Doing Business, including work to develop a reliable One Stop Service (OSS) platform, which would provide streamlined electronic services to domestic and foreign investors. Rahman showcased IT, pharmaceuticals and biotechnology, energy, ready-made garments and manufacturing as critical sectors for the government of Bangladesh, and noted women’s economic empowerment as a key focus area. Participants also engaged the Bangladeshi officials on impediments to investment, as well as the opportunities they see in the growing Bangladesh market.

If you are interested in the U.S. Chamber’s work on South Asia, or would like to more information about joining the U.S.-Bangladesh Working Group, please contact Sid Mehra.