As India celebrated its 72nd birthday during last week’s Independence Day celebrations, Prime Minister Modi marked the occasion with a wide-ranging speech from the ramparts of the Red Fort addressing some of the challenges facing the nation and his determination to steer the ship of state. While much attention has focused on the decision to revoke Article 370, which granted special status to the state of Jammu and Kashmir, the speech also highlighted important economic and development priorities, including a plan to invest nearly $50 billion to bring piped water to households and much-needed stimulus in the form of $1.4 trillion in spending on roads, railways, and other infrastructure.

Amid a slowdown in consumer spending, Prime Minister Modi noted the need for India to grow exports in order to boost jobs and create the path to a $5 trillion economy by 2024. Another key announcement was the establishment of a Defense Chief of Staff position, akin to the U.S. Chairman of Joint Chiefs of Staff, designed to create a unified command structure in the Indian armed forces. While details on implementation for many of these announcements are not yet available, we are tracking government policy initiatives and will bring them to you as they are unveiled.

Trade and economic issues were also discussed in a 30-minute phone call between President Trump and Prime Minister Modi earlier this week, alongside a range of regional and bilateral issues. With the two leaders expected to meet on the margins of the G7 Summit in France this weekend, there is some potential for progress towards resolution of lingering trade issues, despite the fact that planned trade talks between Amb. Lighthizer and Minister Goyal have yet to take place. With another potential leader-level meeting in New York in September, we could be in for a period of more intense engagement between the two governments.

USIBC continues to be actively engaged on all of these developments. We are also busy preparing for the upcoming visit by PM Modi to the United States, which will include travel to Houston for the Howdy Modi Summit, followed by New York City for the U.N. General Assembly meetings. The Houston event is already sold out, with over 50,000 people expected to attend – making it the largest event ever held for an Indian Prime Minister in the United States. It’s also the one of the largest gatherings ever for a foreign leader, second only to Pope Francis’ visit in 2015.

USIBC will be engaged in both cities and look forward to seeing many of our members there. For more information on how you can get involved, please reach out to me or Sid Mehra. 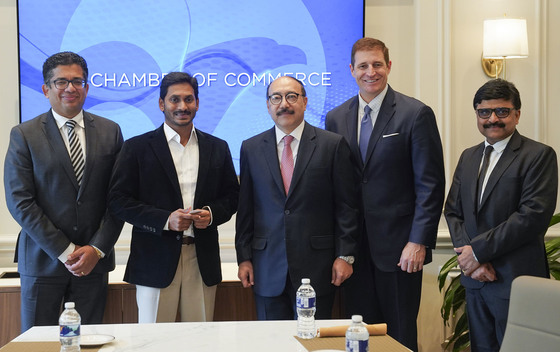 August 16 – U.S. and Andhra Pradesh:
A Partnership for Growth
In partnership with the Atlantic Council South Asia Center and the Georgetown University India Initiative, USIBC hosted Andhra Pradesh Chief Minister Y. S. Jaganmohan Reddy in Washington. The event was the only business-focused engagement during the Chief Minister’s first visit to the U.S. since his victory in Andhra Pradesh in May. U.S. Chamber SVP Rob Schroder and Indian Ambassador Harsh Shringla highlighted the importance of state-level engagement, and noted Andhra Pradesh’s positive growth trajectory and areas for future engagement with U.S. industry.
Chief Minister Reddy emphasized investment opportunities in his state, which include inftrastructure, transportation and logistics, and the growing agricultural sector.
For more information, please contact Sid Mehra.